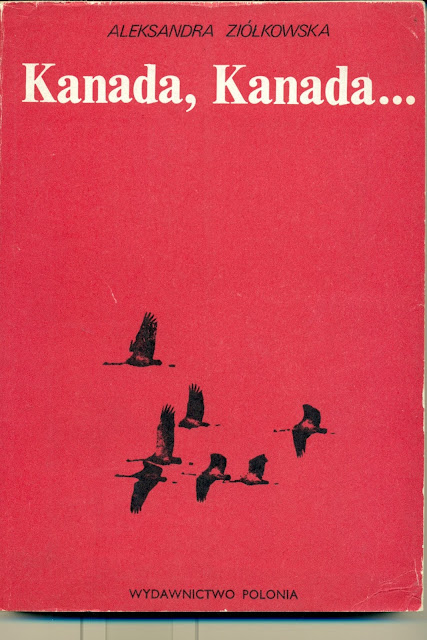 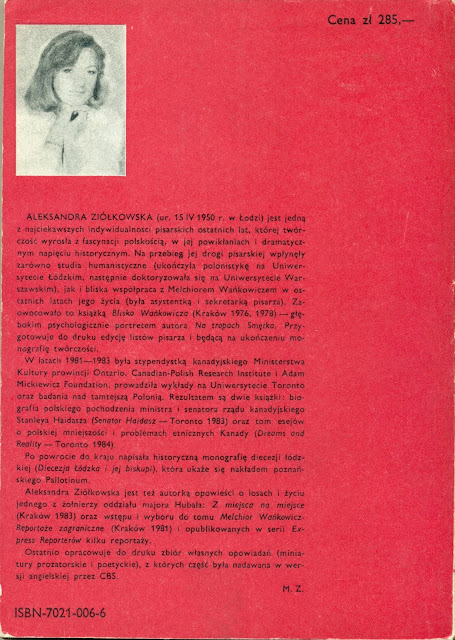 „Here is another important addition to the history of the human side of immigration to Canada. This book by Aleksandra Ziolkowska, translated by Wojtek Stelmaszynski,  contains 31 narratives about Polish immigrants in Canada. The stories depict the difficult beginnings of these immigrants, some ending in disappointment, some leading to an outstanding success. All the profiles in this volumes describe real real people and actual events. The author’s goal is to give a true cross-section, an honest representation of attitudes, personalities, careers and ways of thinking”.

„In her 1984 short-story collection „Dreams and Reality. Polish Canadian Identities”, published in Polish as „Kanada, Kanada”, Aleksandra Ziolkowska-Boehm chronicles the daily struggles of postwar Polish immigrants in Canada. With characters such as Maciej, a recently arrived laborer in Canada, who finds himself employed by a miserly farmer who refuses to take him to the doctor after he injures his arm, and Stefan, a shoe factory janitor, who gives his address to an ill-mannered priest in hopes of getting a job at the parish’s Polish school, only to receive Sunday offering envelopes instead, the stories capture the daily tempests weathered by many postwar displaced-persons. With a well-trained eye and concise writing style, Ziolkowska-Boehm, a recipient of the Kontrasty and Zloty Exlibris awards, allows the reader to experience the uncertainty, joy, and discrimination endured by the masses of twentieth-century Polish immigrants to North America”.


The talented writer shows her interest in Polish immigrants to Canada - their life and strugges, their hopes and disappointments. It shows the achievement and happiness they found in a new country and a new environment. The book is true, touching and very well written. The original title in English "Dreams and Reality".


The book is written beautifuly and I learned about my fellows Polish immigrants a lot. I can be proud of them. It is written with genuine talent of observation, showing interesting details, thoughful thoughts, impressions. I recommend the book for everyone who wants to immigrate, not to scare him/her, but to appreciate the circumstances the others had to go through. This book helps to appreciate the new adopted country, and... to love the old country - Poland.


The talented writer shows her interest in Polish immigrants to Canada - their life and struggles, their hopes and dissapointments. It shows the achievement and happiness they found in a new country and a new environment. The book is true, touching and very well written.

Depiction of Polish immigrants in Canada with a great talent, March 20, 1999

In the monthly magazine published in Paris "Kultura"(9. 504 1989), a review of the book "Dreams and Reality" was published. Benedykt Heydenkorn stressed that the author of the book, Aleksandra Ziolkowska, a young Polish writer, depicted the Polish immigrants in Canada in an interesting way, with a great talent, but also in a very objective way. He remarked that she didn't want to prove anything, she only wanted to share all kinds of stories of people's lives, their views on Canada and their views on the old country Poland. He stressed that she didn't generalize anything.

In the quarterly Ossolineum "Dzieje Najnowsze" ( 3-4 1988), Prof. Marek Drozdowski wrote that the stories are written with talent and understanding. He asserts that the reader can learn about the painful episodes that immigrants faced in establishing themselves and finding their own place in a new society in Canada. He liked the philosophy of immigration shown in one story about Irma, and he also liked the way Ziolkowska portrayed the Canadians Indians.

Professor Marcin Kula , the well recognized historian at Warsaw University, wrote in the Krakow scientific magazine "Przeglad Polonijny" (NR 2, 1988 ) that the book "Dreams and Reality" teaches more about the problem of immigration than the scientific essays about that subject. The book gives material for reflection about the myth of a "gold Eldorado" that was so popular among the people leaving Poland.

(...) I was delighted also to receive the books, and I have already started reading my copy. It is written with genuine feeling for the very special circumstances that the Polish immigrants encountered upon setting in Canada and I’m certain that it will give the Polish reader a new appreciation of what the Polish settlers have accomplished. Needless to say, I was particularly gratified by the chapter regarding my father.

I would be happy to send you copies of my most recent bookis, provided there was some way of making certain that they reach you. If you have a suggestion, please let me know.

“I have read over 100 pages of  “Dreams and Reality” finding it interesting and absorbing. The personal stories and opinions of the characters make it worthwhile reading (…)

Aleksandra’s book is very interesting and I like the fairness of her reports. One gets a very good impressions about the difficulties and the life as it was at that time. Many people nowdays could learn from the ones who had to rebuild their existence in a foreign country”.

All the profiles in this volume describe real people and actual events. Most of the subjects immigrated to Canada after the Second World War, and the majority live in Ontario. Their stories are drawn from personal conversations—or memoirs and reminiscences written by Polish emigres in Canada.
I have selected the themes and subjects myself regardless of suggestions from others (for which I beg their forgiveness). My sole guiding principle was to present the widest possible array of people. The book includes those who have achieved success, who have found themselves and their place—along with a deeper meaning to life—in the new homeland; the dissatisfied and the malcotents; and those with whom emigre life has definitely not agreed, those who—despite their material successes—have remained sceptics. A large majority have a positive outlook; they are happy in their new homeland, emotionally attached to it. Nevertheless, I did not want to omit those whose attitudes are, so to speak, unconventional among Canadian immigrants, who should be incarnations of satisfaction and success. I strove for a true cross-section, an honest representation of attitudes, personalities, careers, ways of thinking.
I did not set out to prove any theories or assertions that, for ex¬ample, Canadians of Polish origin are devoted to social causes or do not become involved in them at all, or that they are full of either faith and optimism or doubt and ill will. Polonia's social activists and leaders have already been profiled by Benedykt Heydenkorn (the term "Polonia" refers to Poles living outside of Poland). Those in responsible positions, or specialists in their fields, were presented by Olgierd Budrewicz. My collection deals with a number of different outlooks, degrees of understanding, careers and successes. Quite simply, I am presenting a variety of people because Canadian Polonia is so diversely textured.
I have deliberately excluded the most recent emigres, those who have arrived in Canada since 1980. An appraisal or assessment of their attitudes and achievements at this time would be premature.
My initial stay in this country lasted more than two years. It was full of events - happy, sad, interesting and difficult—which all enriched my life and my experiences. I value each incident in itself for adding to my personal biography as well.
I have travelled extensively in this country—by plane and train, on subways and buses. I was invited to elegant dinner parties and bought hamburgers at McDonald's. I saw many things through the eyes of my son who, while delivering "The Toronto Star" for two years, had his own "career" and experiences. Thanks also to him I became acquainted with the Canadian educational system. I am now a great admirer of the rapport that exists here between teacher and student, as well as its encouragement of independent thinking in Canadian youth.
I feel I have come to know this country quite well. The longer I live here, the more I appreciate it. I remember what a great impression watching the Conservative leadership campaign on television, the victory of Brian Mulroney, made on me: what a marvellous display of effort, competition and, above all, the free electoral process.

Thanks to Federal MP Jesse Flis, I was able to meet Prime Minister Trudeau. Would it be possible under a different political system to have a chat with the leader of one's country? After my conversation with Trudeau, I realized what charisma meant: this "magus” as Richard Gwyn called him, really has a magic personality.

I marvelled at the vastness of Canada during my trips to northern Ontario. And a though I have visited warm Florida and sunny California, which both fascinated me, I was only truly moved when, en route to the White Dog Reservation for an authentic Indian pow-wow, we had to stop the car to let a she-bear and her cubs cross the road.
I have so many people to thank for so much...
...Marion Andre, for the feeling of gratitude that one is actually here; William Kilbourn for his invaluable nuggets of information on "the making of the nation
...Senator Stanley Haidasz and MP Jesse Flis, who let me in on how the country is run.
...Elizabeth MacCallum and John Fraser, Jack and Ley a Lud-wig, Barbara Frum, and Merle Shain for their openness and sincerity.
...Special thanks to General Bruce Legge. I owe a great deal to Ontario NDP leader Bob Rae, and to Sheila Cirouac. I greatly value the honour bestowed on me by the International Constantinian Order.
... Janusz Dukszta introduced me to the chic world of Toronto Society. With his brother Andrzej, I attended concerts and plays in Stratford.
...I smile when I recall the wonderful stories I learned from Peter Rooper and Charles Nobbe. I made friends with June Chow, a Chinese pianist who loves the music of Chopin. Grace Kopec introduced me to Parry Sound and taught me to love the prose of W. P. Kinsella. Gail Henley showed me the Kaszuby district of Ontario, a kind of Polish oasis in Canada. Mary and Graham Sinclair revealed to me the beauty of Canadian minerals.
.. .My appreciation goes out to Ania and Zenon Jurksztowicz, as well as to Irma Zaleski, Father Edward Ewczynski and Alicja Manterys, all of whom showed me new worlds and feelings I treasure very much.

Dozens of people were sincerely hospitable to me. Thank you to Hanka and Benedykt Heydenkorn for keeping in touch almost daily and helping at critical moments, and to Marina Glista for how warmly her family received me into their home. I recall especially the hospitality of Hania and Leszek Galko, the Kokociński's, the Kotarba's, the Liszkowski's, Albin and Stanisława Malicki, Nina Miaszkiewicz, Alexandra and Tadeusz Stelmaszynski, Tecia Werbowski and the Zieliński's. Special thanks to Zdzisław Przygoda for, among other things, teaching my son to ride his horse, Jolanta.
I would also like to mention two people whose passing my son and I felt most deeply, and whose friendship and assistance are truly missed: Professor Tadeusz Krukowski and Jozef Steinberg.

I would like to thank Adam and Alina Bromke for their affection toward my son.
My gratitude also goes out to Rudolf Kogler for his frank, thoughtful consideration of my plans for writing this book, and to Wojciech Krajewski for overseeing the project.
Above all I would like to thank the Ministry of Culture and the Executive of the Adam Mickiewicz Foundation who helped make this volume possible.
My thanks to Henry Slaby for access to photocopying services, to Kazimiera Budziak for her gracious handling of my business affairs; to my translator, Wojtek Stelmaszynski, for the pleasant, open atmosphere in which this project was carried out.

To all those named and unnamed, my heartfelt thanks for your acts of warmth, sincerity and assistance. I hope you will all find something of interest in these pages.