Ingrid Bergman and her American Relatives


INGRID BERGMAN AND HER AMERICAN RELATIVES


List of Photographs: from the Archives of Norman Boehm v


11 Anastasia and the End of the Second Marriage 55


15 Pia and the Rossellini Children 83


Epilogue: For Love and Glory 99 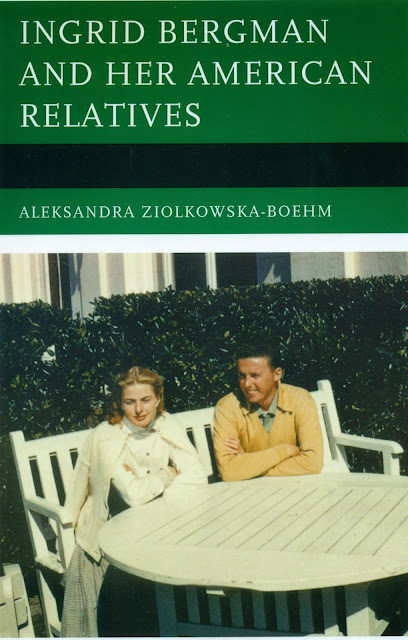 “Ingrid will best remembered for her part in “Casablanca”, staring with Humphrey Bogart in 1942. It was one of the many films, plays and TV documentaries she acted in during her lifetime. She lived to act, saying she left her shyness behind when she stepped on the stage. As a tall, sensuous and beautiful Swedish woman, she began acting early in life, in London, Paris, America and Sweden. She won many awards, including three Oscars, during her lifetime. The book describes the relationship with her American relatives, the Boehm. Cousin Norman Boehm visited with her during her lifetime. Correspondence between Aunt Blenda Boehm, her son Carl and grandson Norman reveal the nature of the actress. The author, Aleksandra Ziolkowska-Boehm did not meet, but research and family contacts with Ingrid bring her to life.
Ingrid’s first marriage to Peter Lindstrom ended in bitter divorce over the child, Pia, all this happening while Ingrid was pregnant with Roberto Rossellini’s child. (After her divorce she married Rossellini and later had three more children with him.) This caused a huge scandal, with Senator Edwin C. Johnson denouncing her on the floor of the Senate. She was finally forgiven 22 years later, in 1975. The Rossellini marriage ended in 1957 when Rossellini became involved with another woman. Later Ingrid marries Lars Schmidt, a marriage which lasted for 17 years.
Ingrid maintained close contact with her children (they did not live with her as Rossellini had custody of the children), stopping work for 18 months to stay with her daughter Isabella when she had serious surgery. She also maintained contact with the Boehms and other family members; much of the correspondence is provided here.
Bergman was diagnosed with cancer in 1974 and struggled with it, continuing to act until she became too weak. She died on August 30, 12982, at the age of 67. She will be remembered as a beautiful actress, and a warm, generous, kind and compassionate person”
Florence Waszkelewicz Clowes, Books in Review, POLISH AMERICAN JOURNAL, October 2013, pg. 23
http://www.polamjournal.com/News/Book_Reviews/book_reviews.html
*
“What a nice book written by Aleksandra Ziółkowska-Boehm, a well known scholar of literature, the author of numerous biographies and contemporary history. Ingrid was a kin of Norman Boehm, the author’s husband. The book presents correspondence between Ingrid Bergman and her relatives residing in the United States.Z iolkowska has cleverly interwoven family letters with the biography of the actress. Ingrid Bergman had a life fulfilled. Her roles in films and theatrical creations provided audiences with joy and pleasure. Bergman is probably one of the few actresses who inspired a spontaneous acceptance. Readers of Ziolkowska’s book will be rewarded with generally warm feelings."
Maja Cybulska, Ex Libris, Tydzien Polski, London, April 27, 2014
*
Ingrid Bergman was loved by critics, directors, writers, and above all by audiences, not only of cinema, but the theater as well.
Aleksandra Ziolkowska-Boehm was able to tell all that should be said about the actress but also about her artistry that grew as much from native talent as from her extraordinary personality.
Bergman’s adventures in acting helped her become someone else, someone who did not feel fear. As a girl, she was kind to others, and so it remained for the rest of her life. The book by Ziółkowska - Boehm recalls not only the history of Ingrid Bergman and her family, but also what happened to her three husbands and four children.
From the letters cited by the author, Bergman is shown as one oriented in the fate of her loved ones. Always interested in their lives, she was appreciative of any sign of feelings for her from them.
Hardly surprising is the fact that the documents provided by the author’s husband were interpreted with a great culture by Ziolkowska-Boehm. The reader will find a beautiful portrait of a woman and an artist, one that anyone would like to be near or in her presence.
Andrzej Józef Dabrowski, Play it again, Ingrid! PRZEGLAD POLSKI, NOWY DZIENNIK,. New York, May 2014
http://www.dziennik.com/przeglad-polski/artykul/zagraj-to-jeszcze-raz-ingrid
*
Aleksandra Ziolkowska-Boehm includes many tales, and much more in her book. After Norman visited his famous cousin Ingrid Bergman and her husband Roberto Rossellini in Paris on his first company vacation, he wrote that he was "treated royally in France": "a high speed spin around Paris late at night in a Ferrari"; a party in the home of the painter Jean Renoir. On his next holiday, he spent a weekend with Bergman and others, including Yul Brynner, in Deauville, France one time dancing with the Swedish actress and Rita Hayworth. He continued to meet Ingrid Bergman over the years (she died in 1982). He is clearly entranced with his cousin, writing in the foreword of Aleksandra's book that, aside from having the talent to win three Oscars, Bergman "was blessed with warmth, generosity, compassion, devotion, dedication and enthusiasm".
Al-Ayyam Al-Jamilah, Spring 2014

"Aleksandra Ziolkowska-Boehm’s “Ingrid Bergman and Her American Relatives” states that in fact, Bergman had no Jewish ancestry. A careful genealogical investigation was made of a maternal cousin in the 1950s before he could be granted a work visa for Saudi Arabia, which formally banned Jews from entering the country."
Benjamin Ivry, Ingrid Bergman's Lifelong Love Affair With the Jews, Forward, Sept. 1, 2015


I found it a great pleasure to learn that the famous star of stage and screen had time for her American relatives. Being an extremely busy person, she found and allocated time to stay in contact, if only briefly, with them. Here is a true tribute to the woman’s character. Ingrid Bergman was and is still loved and respected by her many loyal fans. Similarly, Ziolkowska-Boehm’s book clearly discloses the same feelings for her by the American relatives.


By reading the enjoyable book by Aleksandra Ziolkowka-Boehm, I learned that there were Americans related to Ingrid Bergman. Throughout her career, she was always portrayed as the Swedish actress and as being totally European. For me, another revelation was her German ancestry that was never disclosed by the media. Why should such a fact be “covered up” when the largest ethnic part of America’s population was of German ancestry? (Klaus Schneider)
http://www.bookdepository.com/Ingrid-Bergman-Her-American-Relatives-Aleksandra-Ziolkowska-Boehm/9780761861508?b=-3&t=-21#Reviews-21


Being of Italian ancestry, I very much admire and appreciate how delicately the author Aleksandra Ziolkowska-Boehm was able to bring about respect and understanding for Roberto Rossellini, the husband of Ingrid Bergman. As a director, Rossellini achieved great respect and recognition for his talents. The author led me to have empathy for him as well as Bergman over the stigmas of their relationship and the failure of marriage. (Anthony Perlosi)
http://www.kalahari.com/Books/Ingrid-Bergman-and-Her-American-Relatives_p_47355443


The author has cleverly interwoven the career of Ingrid Bergman with the relationship the actress had with American relatives. Over a time span of nearly forty years, Bergman maintained contact with these relatives. The warmth and gratuitousness of the famous actress is beautifully portrayed by Ziolkowska-Boehm from Bergman’s letters to and personal contacts individually described. Here we learn of a very famous woman caring for, and treating accordingly, her not so famous relatives. (Virginia Degiorgio)
http://www.easons.com/p-1394151-ingrid-bergman-and-her-american-relatives.aspx

I do admire your writing a great deal – it is as if you are speaking yo the reader.  And I do review a great many any books
Florence Clowes, Vero Beach, Florida, 11/22/2013
*
“What a wonderful tribute to a special lady”.
Jean Wahl, Wilmington, Delaware, January 2014

I read your book ….whenever I read about mamma I get very sad and miss her a lot.
I sent the copy of your book to mamma's archive at the Wesleyan University in Connecticut where all paper concurring her is kept.
Isabella Rossellini, August 3, 2015
*
.The book was so interesting I could hardly put it down. Ingrid was indeed a very beautiful woman, and a strong one with what she had to through.