Hidden Jewel of the Western Caribbean 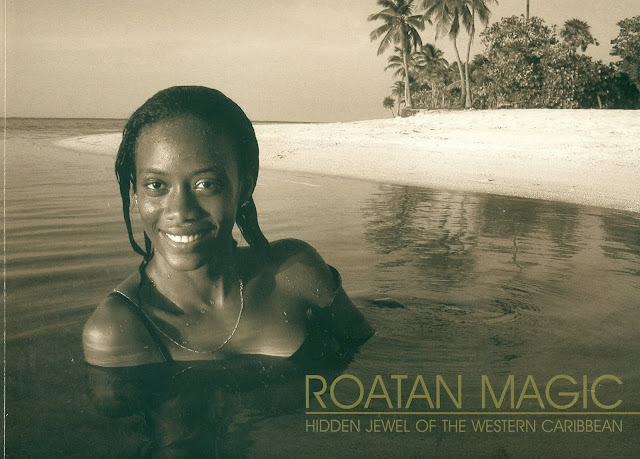 The book provides a beautifully descriptive narrative of the island of Roatan, its history, geography, fauna, people and wildlife. Supported by an array of striking photographs if the foregoing futures the book provides both pleasant and informative reading as well as relaxing scenic tour of Roatan.

White sandy beaches dotted with conch shells under leaning palms may be lost in other places, but they still exist just around the bend in the road on Roatan. With much of the Caribbean becoming increasingly homogenized and unoriginal, Roatan is more than just another Caribbean island.
Lush, emerald hills roll into savanna valleys, tropical forests, mangroves and idyllic beaches. Surrounded by one of the most vibrant reefs in the Western hemisphere, Roatan is the largest of the seven islands that comprise the Bay Islands archipelago. The waters around the islands team with life. There are whale sharks, pods of wild dolphin and solitary blue marlin break the ocean's surface.
Roatan's diverse environment is not only home to exotic flora and fauna, but to a distinctive and gregarious people. Over the centuries, Paya Indians, Spanish, English, Garifuna and Afro-Antilleans have created an ever evolving mosaic of cultures and traditions on Roatan that today is as much part of the Caribbean as it is a part of Central America.

ABOUT THE AUTHOR
Thomas Tomczyk is a journalist and managing publisher. Born in Poland, he studied architecture at the University of Arkansas and worked as an architect in Dallas, San Francisco and New York. After receiving his MA in Journalism from the University of Missouri, he launched Bay Islands Voice, and English language community magazine based on Roatan, Honduras. He has lived on the island since 2003.
.
REVIEWS
.
This oversized book full of beautiful full-color photographs is a work of art. Anyone visiting the Caribbean islands will agree. The small island of Roatan is in the Caribbean, part of a chain making up the Bay Islands, just off of Honduras. It, fortunately, has not been invaded with commercialism. The photos depict people and their culture, geography and vegetation. Tomczyk has lived on the island for the past eight years and is a journalist.
Florence Waszkelewicz Clowes, POLISH AMERICAN JOURNAL, Boston, NY, March 2011

*
"Roatan Magic is a coffee table book for sale at establishments on the island of Roatan and on mainland Honduras. Its primary purpose is to serve as a visual reminder for tourists who visit the island. To this end, Roatan Magic achieves its goal. The book, using limited text, covers topics such as geography, history, flora and fauna, sports and pastimes, culture of celebration, and the Garifuna. Colorful photographs dominate a book that gives a glowing image of Roatan.
Roatan is the largest of the Bay Islands located off the coast of Honduras. Because of its unspoiled coral reefs and proximity to the United States, Roatan’s popularity among divers introduced tourism in the 1980s (9). After Hurricane Mitch wrecked the Honduran economy in 1998, tourism emerged as a way for economic development (Kirtsoglou and Theodossopoulos, 139). Cruise ships bring many of the visitors for a daily visit, and onshore vendors offer activities including shopping, relaxing on the beach, snorkeling and scuba diving, and learning about the Garifuna.
The Garifuna are descendants of Carib, Arawak, and West African people who lived on Saint Vincent for years while successfully fighting off the English (75). Eventually the English defeated the Garifuna, or Black Caribs as they were called, and exiled them to Roatan, where on April, 12, 1797, two thousand Garifuna landed. Paya Indians had originally settled the island, but slave raids nearly wiped out their population. The English built forts in the 1700s to protect the entrance to Port Royal, however these structures were abandoned by the time the Garifuna arrived. Only a few English settlers remained (17). Nevertheless, many of the Garifuna were relocated to the Central American mainland. Those who remained founded the community of Punta Gorda.
Punta Gorda remains the primary Garifuna settlement on Roatan. The Garifuna are expert canoe makers and fisherman. Some Garifuna try to make a living through tourism as dancers and musicians in groups participating at establishments outside of Punta Gorda for a prearranged fee or for tips. One study reports that while these group performances took place for more than twenty years, the Garifuna’s share of the income remained inadequate. The bulk of the money went to non-Garifuna agents and establishments (Kirtsoglou and Theodossopoulos, 147). This led some Garifuna to claim that their culture had been “taken away.” Tourists merely saw a visual image of the Garifuna out of its proper context. The Garifuna wanted tourists to visit Punta Gorda so that they could control the commodification of their culture to both better the tourist’s experience and to reap the profits of tourism (Kirtsoglou and Theodossopoulos, 146).
A few steps have been taken in this direction. An artificial cultural center has been established near Punta Gorda that introduces tourists to Garifuna history and culture through migration narrative, Garifuna punta dancing, and cassava bread baking. However, this is a cruise ship operation. In addition, local agents drive tourists through Punta Gorda to take pictures and visit a small gift shop. It is doubtful that the Garifuna have achieved control of the way their culture is being presented.
Roatan Magic demonstrates the island’s culture through the brief text and beautiful photographs of Thomas Tomczyk, who also started Bay Islands Voice , a community magazine. Tomczyk’s book briefly covers the Garifuna, but it does not focus on them. It is a basic tourist book, not a study of indigenous people. Readers looking for detailed information on Garifuna culture, including the relationship between culture and tourism, must look to other sources. Roatan Magic offers a brief lesson to those visitors who did not see the Garifuna and a limited reminder to those who did. The audience that Tomczyk writes for will find this adequate.
Although the author provides only a concise narrative of the history of Roatan, he does mention an important fact that impacts the Garifuna. Mainlanders from Honduras are the fastest growing population on Roatan. Latin American culture is replacing English culture on the island (31). However, he does not explain the importance of this. An ethnographic study reports that Garifuna children in Punta Gorda understand little English since Spanish is the official language of Honduras and is taught in the local schools. This harms the Garifuna in two ways. First, the elders speak English, so it is a loss of their heritage. Second, communicating in the English language is important for tourism (Kirtsoglou and Theodossopoulos, 141).
(...)
Reviewed by Jeff Ewen; Drew University, INDIGENOUS PEOPLES ISSUES @ RESOURCES, October 25, 2012
*
Roatan Magic is an excellent collection of photos that evokes curiosity, nostalgia and a sense of Roatan's unique culture. The book is divided into topical sections, from the island's geography and history to its celebrations and sports, with short informative essays beginning each section. Every glossy page, with photos of breathtaking landscapes or intimate moments of the islanders, tells the thousands of stories that occur every day in Roatan.
The book is high quality, in terms of binding and printing ,with both photos and layouts that are thoughtful and clean. The author's understanding and appreciation of Roatan and its people are palpable in the pictures included.
If Roatan is the "Hidden Jewel of the Western Caribbean," as the subtitle says, Roatan Magic's expansive collection of photographs capture the hidden gems which make it so. Buy this book for Caribbean enthusiasts or as a perfect souvenir of Roatan. It's well worth the cost.
Clint Roberts, Amazon
*
I visited Roatan three years ago - on a cruise - and could not believe my eyes. What a pristine beaches, what a quiet quaint place!
That magic is shown in the book by Thomas Tomczyk.
Wonderful photographs! I learned from the text and from photographs of "Roatan Magic" that the island has its tradition, habits, customs, colorful costumes, and a rich past.
I would like to go for a longer time and experience more. Thanks to the book, I plan to do so soon!
Bill Adams, Amazon