Senator Stanley Haidasz A Statesman For All Canadians

Polish Institute of Arts and Sciences in Canada, Montreal
215 pages 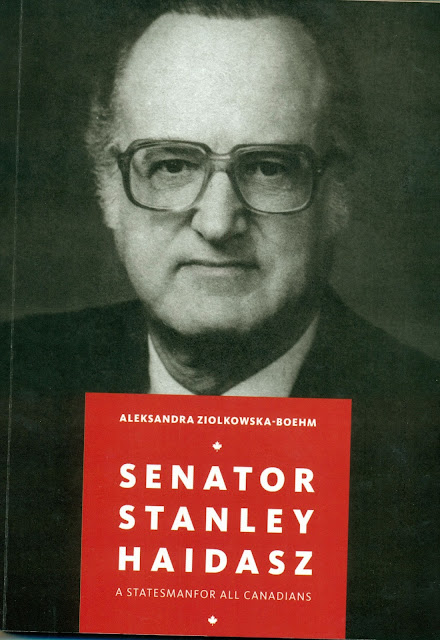 Aleksandra Ziolkowska-Boehm’s book about Senator Haidasz is not only an engaging personal account but also a contribution to a wider knowledge about the rising social significance of the Polish community in Canada.


Stanley Haidasz described in this book by Dr. Aleksandra Ziolkowska-Boehm has left a permanent impact on the history of Canada as the first Canadian of Polish origin to enter the federal Parliament. I also believe that he was a perfect representative of his constituency. He was always accessible and never refused to give of his time and attention. He did not serve only the Polish community but helped and cared for all the
ethnic minorities. He was very popular among them and well liked.
Jesse Flis, member of Parliament for fourteen years, presently Director NATO Council of Canada, Council for Polish Studies-University of Toronto


Throughout his life, Stanley Haidasz demonstrated a strong spirit of public service and a singular dedication to bettering his community and country. A highly esteemed physician and proud member of the Polish community, he brought unique talents and perspective to Canadian political life. Spanning five decades, his distinguish parliamentary career as a Member of the House of Commons, Senator and the first Secretary of State for Multiculturalism, leaves an impressive and enduring legacy.


Stanley Haidasz was an anchor of the Polish community in Canada, and served Canadians of all backgrounds throughout his life as a doctor, Member of Parliament and Senator.”


He was a caring and compassionate person, starting with the dedication to his family and, beyond that, to leadership in the Polish community, remembering his roots as the son of Polish immigrants, and, of course, his service to the people of Canada.

**
A sensitive biography of a Canadian of Polish background who started his adult life as a doctor and later became a senator in the Canadian Parliament. In addition to the biographical part, the book records exchanges between Haidasz and other members of Canada’s political establishment.
Sarmatian Review, September 2015

On Thursday, August 12, 2009, Stanley Haidasz passed away. For over forty years he was a Liberal member of Canada’s Parliament, senator, and cabinet minister. In this biography Aleksandra Ziolkowska-Boehm, examines the life of the first Canadian with Polish heritage to serve in Canada’s Parliament.
Spurred to search for a better life in Canada, Stanley’s parents emigrated from Stanislawów, Poland in 1910. They settled in the Queen Bathurst area of Toronto, which was an area to which Ukranians, Slovaks, and other Polish people had moved. Thirteen years after the Haidaszs arrived in Canada, Stanley was born.
In his neighborhood and within his family everyone spoke Polish; Stanley did not learn to speak English until he started first grade. Once he learned English, he excelled in school. He also learned he had a gift for public speaking and even competed in public speaking competitions. In high school he had his first taste of politics when he worked for the campaign of Arthur Roebuck, a liberal member of the House of Commons. Roebuck won the election.
Though Roebuck’s campaign was successful, Stanley decided to pursue a different path; it would take many years for Haidasz to return to politics. He briefly attended seminary but then transferred to the University of Ottawa where he earned his bachelor of philosophy degree. Medical school came next followed by a career as a physician. During this time he met and married Natalia Gugala with whom he later had four children.
In 1957 everything changed when Haidasz was convinced by prominent members of his community to run for election for the House of Commons, representing an area of Toronto that was heavily populated by immigrants. Despite strong conservative leanings in the rest of the city, he won the election. During his time in Parliament, he staunchly advocated for immigrants, helped to pass Medicare, as well as the Clean Air Act. Stanley eventually retired from politics in 1998. His worsening health convinced him to move to a retirement home in 2005. When he died four years later, he was lauded for his tireless efforts to improve the lives of those striving to be and those who already were Canadian citizens.
About the author. Aleksandra Ziolkowska-Boehm was born in Łódź, Poland and earned her master’s degree in Literature from the University of Łódź and a Ph.D. in Humanities from the University of Warsaw. She has lived all over the globe including England and Toronto, Ontario before finally settling in Wilmington, Del., where she lives with her husband, Norman Boehm and son, Thomas.

Senator Stanley Haidasz bvy Aleksandra Ziółkowska-Boehm
Published in 2014 in Montreal by the Polish Institute of Arts and Sciences in Canada (ISBN 978-0-9868851-1-2), Senator Stanley Haidasz: A Statesman for all Canadians, is a biography of a Polish-Canadian politician who has made a great impact on the life of the country. The publication of this book was supported by Canadian Polish Millennium Fund (Toronto), and Polish Socio-Cultural Foundation of Quebec (Montreal). (…)
http://www.biblioteka.info/haidasz.pdf
PAHA Newsletter
Polish American Historical Association Newsletter
ISSNO739-9766 Vol. 72, No. 2, October 2015

Ziolkowska-Boehm’s book constitutes a good example of how ethnic minority leaders may exert a great influence not merely on their local communities but also on entire nations. In the person of Stanley Haidasz, Polish Canadians undoubtedly gained an outstanding leader devoted to serving Polonia, and above all, a man of high standards and firm convictions (….).

April 6, 2015
Dear Aleksandra,
Thank you for sharing with me your timely book about Senator Haidasz. He deserves it and he would to be very pleased with your efforts.

.
April 17, 2015
Dear Aleksandra,
Please accept my congratulations to you on the birth of your latest book! Brzezinski makes the important observation that you excel in educating Canadians (also Americans) in becoming much more appreciative of the social significance of Polish people in North America! You have fulfilled a very important need, and provided a strong literary service to your native homeland. I am proud to be your friend.
Sincerely,
Bob Ackerman
New Alexandria, Pennsylvania